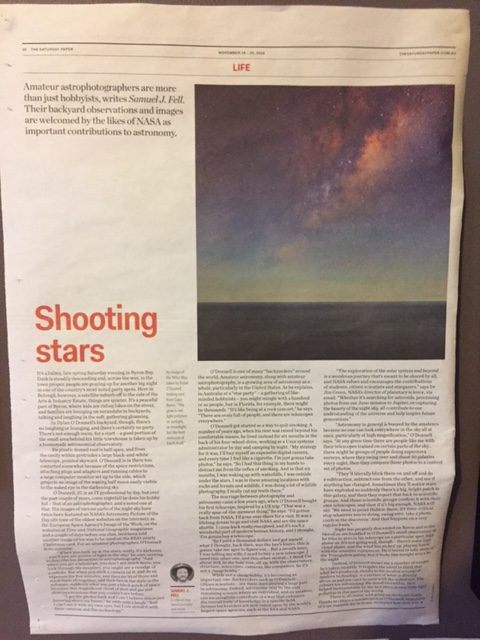 Amateur astrophotographers are more than just hobbyists, writes Samuel J. Fell. Their backyard observations and images are welcomed by the likes of NASA as important contributions to astronomy.

It’s a balmy, late spring Saturday evening in Byron Bay. Dusk is steadily descending and across the way, in town proper, people are gearing up for another big night in one of the country’s most noted party spots. Here in Belongil though, a satellite suburb off to the side of the Arts & Industrial Estate, just out of the CBD, things are quieter. It’s a peaceful part of Byron, where the locals live, where young families have set up. There are kids riding bikes on the street, people are lounging on verandahs in surrounding backyards, talking and laughing in the soft, gathering gloom.

In Dylan O’Donnell’s backyard though, there’s no laughing or lounging, and there’s certainly no party. There’s not enough room, for a start. A good portion of the small area behind his little townhouse is taken up by a large, homemade observatory. Large relative to the space, anyway.

Its plastic domed roof is half open, and from the cavity within protrudes a large black and white telescope, pointed skyward. O’Donnell himself is in there too, contorted somewhat due to the space restrictions, attaching plugs and adapters, running cables to a large computer monitor set up to the side, which projects an image of the waxing half moon, via the telescope, easily visible to the naked eye in the darkening sky. 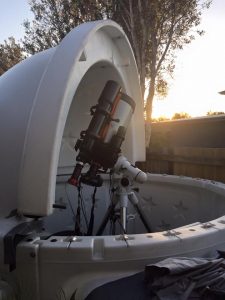 O’Donnell, 37, is an IT professional by day, but over the past couple of years, come nightfall, he leaves that behind him and dons his hobby hat – that of an Astro photographer, and a noted one at that. His images of various parts of the night sky have twice been featured on US space agency NASA’s Astronomy Picture of the Day site (which, incidentally, is one of the oldest websites on the internet); as the European Space Agency’s Image of the Week; on the websites of Time and National Geographic magazines; and a couple of days prior to our chat, he’d found out another image of his was to be used on the ESA’s annual Christmas card. For an amateur Astro photographer, O’Donnell is no minnow.

“When you look up at the stars, really, it’s darkness, you’ll just see points of light in the sky,” he says on what the appeal of this hobby is to him. “And when you get a telescope, you don’t see much more; you look through the eye-piece, you might see a smudge of a nebula. But when you stick a camera on it, and do an exposure for five minutes, and then do thirty of those and stack them all together and [then] tweak the dials in the software, suddenly what was just a black patch of space, becomes this magnificent cloud of dust and gas and glowing emissions that you couldn’t see before.”

“I get the photos back and I can’t believe this is just hovering above my house,” he adds with a laugh. “And I can’t see it with my own eyes, but I can reveal it with these cameras and this technology.”

O’Donnell is one of many ‘backyarders’ dotted all over the globe. Amateur astronomy, along with amateur Astro photography, while a relative niche, is a growing area of astronomy as a whole, particularly in America. As he explains, in Australia at a star party (a gathering of like-minded hobbyists), you might mingle with a hundred or so people, but one in Florida for example, would draw thousands. “It’s like being at a rock concert,” he laughs. “There are ovals of people, and there are telescopes everywhere.”

O’Donnell came into this hobby initially as a way to quit smoking. A number of years ago, when his rent was raised and he didn’t want to pay the extra, he lived instead for six months in the back of his 4WD, working as a Unix Systems Administrator by day, and camping by night. “My strategy for [quitting smoking] was, I’ll buy myself an expensive digital camera… and every time I feel like a cigarette, I’m just gonna take photos,” he explains.

“So I had this thing in my hands to distract me from the reflex of smoking. And in that six months, I was waking up with waterfalls, I was outside under the stars, I was in these amazing locations with rocks and forests and wildlife, I was doing a lot of wildlife photography. I really cut my teeth there.”

The marriage between photography and astronomy came a few years ago, when O’Donnell bought his first telescope, inspired by a US trip. “That was a really spur of the moment thing,” he explains. “I’d gotten back from NASA, I’d gone over there for a visit, it was a lifelong dream to go and visit NASA and see the space shuttle. I came back really energised, and it’s such a wonderful part of modern human history, and I thought, ‘I’m gonna buy a telescope.’

“So I paid a thousand dollars and got myself what I thought, back then, [was] the bee’s knees, this is gonna take me ages to figure out… but a month later, I was telling [my wife], I need to buy a new telescope. I need this other one, and this other mount… I think I’m about 30k in the hole now, all up, with the observatory, structure, telescopes, cameras, the computers. So it’s not a cheap hobby.”

While not a cheap hobby, it’s becoming an incredibly important one. Backyarders like O’Donnell, citizen scientists, are these days playing a large part in astronomy as a whole. Indeed, astronomy is the only remaining science where an individual, and an amateur one at that, can meaningfully contribute in a way that enhances the overall body of knowledge in a specific field. So much so, that serious backyarders are now relied upon by the world’s largest space agencies like the ESA and NASA.

“The exploration of the solar system and beyond is a wondrous journey that’s meant to be shared by all, and NASA values and encourages the contributions of students, citizen scientists and stargazers,” concurs Dr. Jim Green, the Director of Planetary Science at NASA, via email. “Whether it’s searching for asteroids, processing photos from our Juno mission to Jupiter, or capturing the beauty of the night sky, all contribute to our understanding of the universe and help inspire future generations.”

“Astronomy in general is buoyed by the amateurs because no one can look everywhere in the sky all at once, particularly at high magnification,” O’Donnell expands. “At any given time there are people like me with their telescopes trained on certain parts of the sky… there might be groups of people doing supernova surveys, where they swing over and shoot fifty galaxies every night, then they compare those photos to a control set of photos of those galaxies.

“They’ll literally blink them on and off and do a subtraction, subtract one from the other, and see if anything has changed. Sometimes they’ll notice stars have exploded, so suddenly there’s a big, bright patch in this galaxy, and then they report that back to scientific groups, and those scientific groups confirm it with their own telescopes, and then if it’s big enough, NASA will say, ‘We need to point Hubble there, it’s time-critical, stop whatever you’re doing, swing over, take a photo, confirm the discovery’. And that happens on a very regular basis.”

Night has properly descended on Byron and so the two of us are huddled in O’Donnell’s small observatory as he tries to zero his telescope onto a particular spot, high above us. It’s not going well however – there’s some high cloud about, and the wind has picked up, playing havoc with the sensitive equipment. He’d hoped to take shots of the Triangulum Galaxy, but it looks like tonight won’t be the night.

He shows me instead a number of images he’s taken recently. It near boggles the mind to think that what he’s produced, thanks to his arsenal of modern technology, is a picture of what is directly above us, and yet can’t be seen with the naked eye. The colours are astounding, the detail incredible. He’s helped immeasurably by the fact there is very little light pollution in this part of the world, but you can easily see how well he’s married art and technology to create images of great beauty.

There is, of course, a lot going on above our heads. And it’s thanks to citizen scientists like O’Donnell, that large parts of this are available for us to see, no matter how dark it is.