[Published in the Summer issue of Peppermint Magazine. EXCERPT] 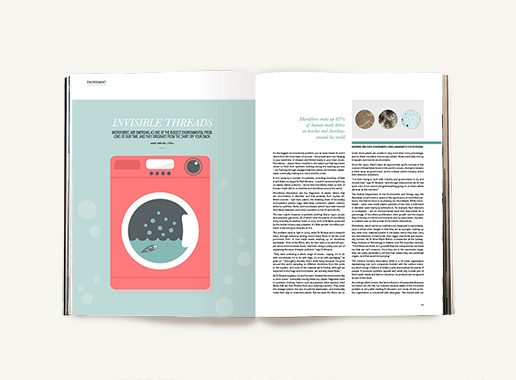 Microfibres are emerging as one of the biggest environmental problems of our time, and they originate from the shirt off your back, writes Samuel J. Fell

It’s the biggest environmental problem you’ve never heard of, and it stems from the most basic of sources – the perpetrators are hanging in your wardrobe, in drawers, folded neatly in your linen closet. Microfibres, plastic fibres invisible to the naked eye that have been shown to shed from synthetic clothing during the washing process, are flushing via domestic wastewater through sewage treatment plants, eventually making it to rivers and the ocean.

A 2011 study by a number of scientists, including UNSW ecologist Dr. Mark Browne, found that microfibres make up 85% of human-made debris on beaches and shorelines around the world.

Microfibres themselves are tiny fragments of plastic debris that are micrometres in diameter, which emanate from myriad different sources – tyre dust; paints; the breaking down of secondary microplastics (plastic bags, take-away containers, plastic cutlery); airborne synthetic fibres; microbeads (which have been banned from facial cleansers and some cosmetics in the US and the UK).

The main culprit however, is synthetic clothing; fleece, rayon, acrylic and polyester garments, all of which emit thousands of microfibres every time they’re washed. Given, in 2014, 60% of all fabric produced by the textile industry was polyester, it’s little wonder microfibre pollution is becoming as rampant as it is.

The problem came to light in 2004, when Dr. Browne and a research team, through extensive testing, found these fibres to be the most prominent form of man-made waste washing up on shorelines worldwide. “A lot of the NGOs, who do their best to try and tell people about environmental issues, had been doing a pretty poor job of explaining the issue of plastic pollution,” explains Dr. Browne, a world-renowned authority on plastic debris pollution.

“They were confusing a whole range of issues… saying, it’s to do with microbeads, it’s to do with bags, it’s to do with packaging,” he goes on. “I [thought], actually, that’s really funny because I’ve gone around the world sampling on different shorelines from the poles to the equator, and most of the material we’re finding, although we expected to find bags and microbeads, are actually these fibres.”