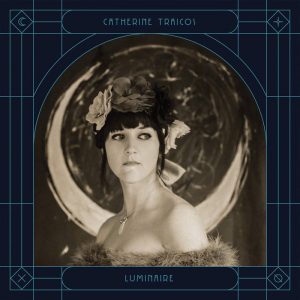 Singer-songwriter Catherine Traicos’s sixth record, Luminaire, was reportedly the most difficult for the Melbourne-based artist to pull together. Three years in the making and almost not seeing the light of day, Traicos has said she didn’t know if she’d have the energy to complete the work, that she barely relaxed throughout the recording process. And yet you’d not know it, so effortlessly does this clutch of songs bloom forth, their almost eerie and dark vibe infectious, demanding repeat listens. There’s a strong cohesion that runs through the record, despite how old some of these songs are, Traicos and her impeccable band able to inject them all with a subtle power that binds them; whether casually skipping through a sonic meadow (Bitter Bones), or grinding in the dark (Tide, with its dissonant cello), it all comes together as an album, as opposed to a mere collection of ten songs. Bookended by Luminaries I and Luminaries II, the former wrought from an emotional time for Traicos, the latter its more joyous sequel, this album may have been hard to make, but its eventual birth marks Traicos as an artist of exceptional poise and talent, as many of us have known for years. SAMUEL J FELL