[Published in the Spectrum section of The Sydney Morning Herald, July 21]

Catherine Britt knows country music, and as such her seventh studio record bristles with knowhow. Instrumentation courtesy of Michael Muchow, Andy Toombs and Australian legend Bill Chambers lend it the earthy sound integral to the genre while Britt’s unique voice commands attention, vying with banjo and guitars to conjure a sound that’s as much Nashville as it is Tamworth.

Where Britt shines in this instance however is in how she’s able to capture a sense of Australia – its wide and brown expanses, its flora and fauna, its foibles and fortunes – without falling into any sort of songwriting or cultural cliché. Which is refreshing, as too much Australian country falls victim to this. Britt is very obviously singing directly from the heart on this record too, and given what she’s gone through in recent years, this isn’t surprising: a serious health issue; an extremely full professional plate; and finally, a new member of the family – this album is about the happiness beyond the storm, and as such it truly resonates with a realism many struggle to attain.

Recorded in her backyard studio in Newcastle, it’s Britt reuniting with her roots, a solid mixture of the mainstream and the underground. Samuel J. Fell 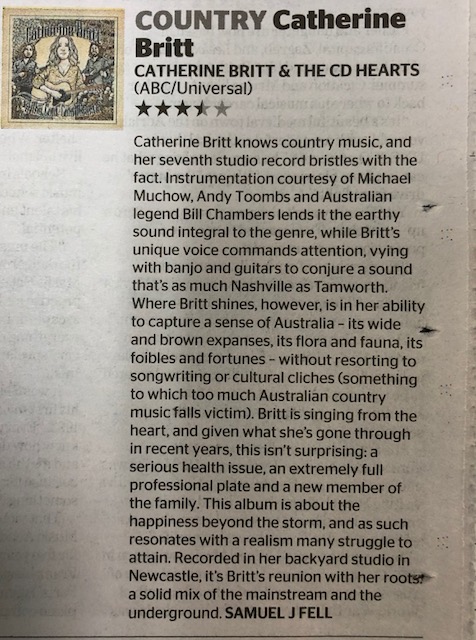