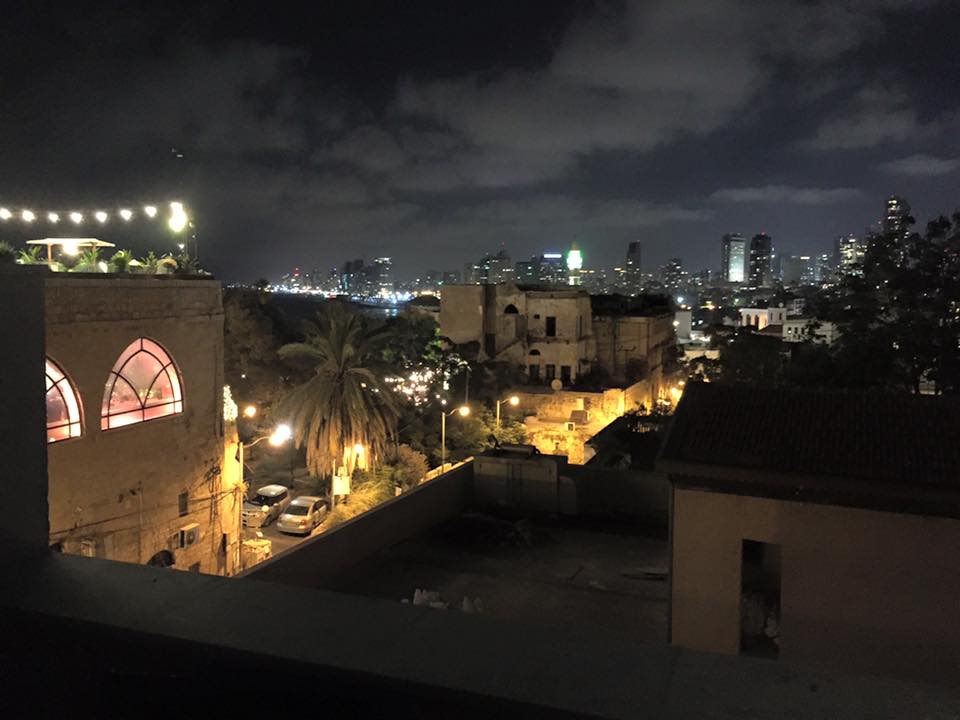 Tel Aviv shimmers rippled gold from the midnight desert. A sprawling jewel against black from the tiny airplane window, disappears as we bank left, reappears on the far side. Closer now. The thud as we touch down and reverse thrust and finally, still.

From verdant English countryside to layers of burnt orange and gold, a layer of dust covers it all in a dull warmth, the heat from the dying day a slow and languid wash that envelops you as you navigate the airport, Hebrew lettering and blue and white flags and shawls draped and flaccid in the marble quiet. 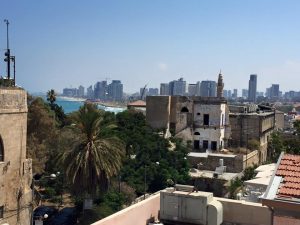 In the old town, Jaffa and its ancient port, lights are lit and music tumbles from old, arched doorways despite the time of day and we sit on the top deck and drink Israeli beer after we’ve put her to bed and we catch up, smoking in the still air, wafting upward. The new city burns bright in the middle distance, white light, while below us basks in yellow, the flickering painting the cobbled streets in ever-changing layers of light and shade. Stray cats prowl and the purple bougainvillea spews over an old grey wall like spent beer from a bottle left in the freezer overnight.

The next day we wander the maze of the port, ancient and labrynthian, tiny galleries and churches hewn into rock on the side of the hill rolling up from the water. We stand on the hilltop and look across the half-moon bay. Sunlight, ever-present, dances on the water, on the stone, off the pale walls of houses shuttered against the building heat. The cats sit in the shade in high places and watch from under lidded eyes.

Across Yefet Street, into the flea market and its own twisted alleys and underpasses, antique dealers’ wares spill onto the roadways. We sit outside a café under an orange umbrella and drink weak black coffee with small glasses of water as people wander past – young and old, some with children hanging off them, in prams and strapped to chests, men on scooters with cigarettes hanging from lips and mobile phones pressed against their ears, the sound of car horns always on the breeze which comes in from the Mediterranean and becomes a part of the city noise like the talking and the yelling, the call to prayer and the music from weddings and churches, Arabic music and Jewish music, the occasional burst of a western sound, cars and trucks and bikes through the round-about at the clock tower, horns and shouting, street hawkers and people gawking and yelling.

The sound of a city shifting restlessly in the midday heat.

In the mornings, I strap her to me and we walk for an hour or so while she sleeps. I pick up one of the newspapers thrown on the front step and tuck it into my back pock 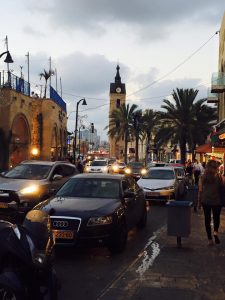 et should I come across somewhere to drink coffee while we’re out but I never do, nothing is open this early. We have the old streets to ourselves and we make for the water, along the foreshore, into the maze of the port and upward, upward, steps and slopes, warn smooth from centuries of feet, so many feet, up to the crown of the hill overlooking it all and down the other side. Across the wishing bridge. Past the church facing west. Into the shade and bustle of Yefet and into the market where nothing is open and we’re hidden from the sun under shade of narrow paths and old, faded sun-shades stretched across alleys entwined with electrical wires and ornate strands of fairy lights and wreaths of coloured cloth.

Everything is burnt orange and gold and there’s a layer of dust that covers it all in a dull warmth and yet it shimmers with a vibrant colour and sheen, polishing the edges and washing the roadways of rubbish and refuse, detritus from centuries of use and overuse and underuse, and the green-blue Mediterranean gently pushes up against its edge and the palm trees bow in the breeze and Tel Aviv exists, shimmering rippled gold in the midnight desert.