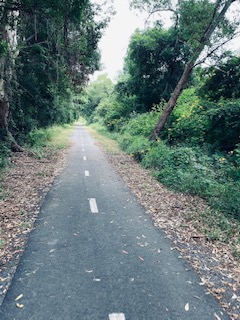 There’s a winding track a five or so minute drive from our place, that cuts through bushland and under the highway, running the couple of kilometres between north Ocean Shores and Billinudgel. It’s only wide enough for walking or bike riding, concrete bollards at each end stopping any cars coming through. It’s wild and untamed off the edges, but the track – cracked bitumen with faded white dividing lines down the centre – remains true and it curves lightly through the growth, little used by anyone aside from those in the know. 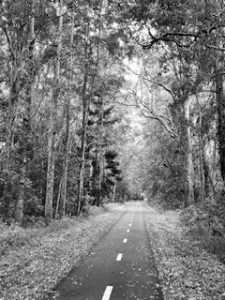 We regularly drive down, park the truck at the eastern end and pull Addy’s scooter out of the back. She darts ahead on three wheels and chatters constantly, picking up sticks and waving them in the air while we wander slowly behind. Aside from the tiny talk, it’s quiet and seemingly remote, a reconnection with nature as you make your way westward, stopping occasionally to peer through the trees, to look up to the arching canopy overhead.

Parts of it reminds me of the American deep south, rural parts of Louisiana in particular as you head west from New Orleans toward Baton Rouge and Lafayette – away from the interstate and the large towns that congregate along same, winding single-lane roads cut through isolated hamlets, past tiny white-painted churches and lean-to shacks partly hidden in groves of pine laden with Spanish moss, pick-up trucks parked haphazard in front.

There’s no hanging moss here, no rusty pick-ups or various houses of the lord, but it has that same lucid melancholy in the way the lantana grows right up to the cracked bitumen, hiding most that’s behind it all aside from the top third of power poles, the remnants of past industry, marshy wetland and rusty tin-topped sheds stacked with rotting rail timber and bolts the size of your forearm. 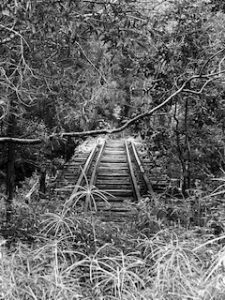 The only remaining signs of the actual rail line, as it were, are the rickety sleepers and oxidized iron that bridge the lethargic brown water of Marshalls Creek.

When you’re not close to the highway, all you can hear are the birds. You can’t see them, but they’re set in the trees and they call to one another like they’re the only living things ever to have been. Butterflies waft through on the occasional breeze, blue and orange, and clouds of grey moths disturbed by footfalls through the low grass on the edge of the path, puff up into the air in a silent frenzy before settling again once their danger has passed. 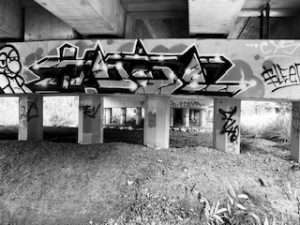 Walking under the highway, it’s a different scene altogether; brutalist and sparse, giant concrete beams span the width of the underpass and road-trains boom by a few metres above your heard, the sound below duller but echoing across culverts and divots in the scree piled out from the track. Storm water pools in stagnant ponds behind wilting wire fences and graffiti murals span beams, adding colour to an otherwise dull and grey concrete expanse.

Spent cigarette butts dot the darker grey of the rock, and there’s an empty cardboard carton of bourbon and cola cans half submerged in the muddy brown water.

At the Billi end, the track passes close to a residential property, a fibro shack built right up to the path, its grey wall scrawled over in green paint a paranoid message hinting at hidden security cameras. I can’t see any. 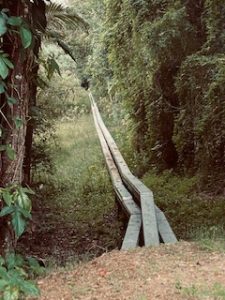 Two pitbulls run the length of a wire enclosure across the patchy grass, barking madly, downing out the birdcall. It’s here that we turn and begin the walk back, under the highway, past the old rail bridge and the metal-encased cabelling running endlessly north, back under the canopy, the roar of interstate traffic fading behind us as we head east, to be replaced with the birds

We round the final curve and can see the truck sitting against the bollads were we left it. Addy scoots up to it and flops over in the grass, her helmeted head seeming far too large for her body. The birds call in the trees overhead as we load up and drive home.