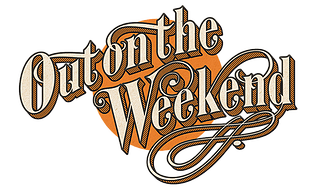 Out On The Weekend

There’s a gale warning for Port Phillip Bay, although one doesn’t need a warning. Winds batter windowpanes and shake down trees, limbs flailing and cracking, the power of it all hitting you in the face, making your collars flap angrily, slapping your ears as you walk from the train toward the pier through the usually quiet and gentrified Williamstown streets; one doesn’t need a warning, it’s painfully obvious, debris scattered everywhere, leaves and branches, overturned bins and the like.

The crowd braces forward though and navigates the headwind, we make our way to Seaworks on the water’s edge where Out On The Weekend is running for the third time. An intimate gathering of likeminded souls whose only aim, despite the inclemency of the weather, is smoked meat and cold cans of beer imbibed to music of the country variety, Americana, alternative country if you will. 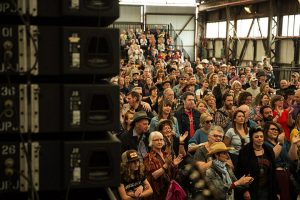 It’s an industrial scene, towering iron sheds arching over concrete throughways and rusty bollards, the incongruous and ramshackle Pirates Tavern across the lot from the Outdoor Stage where All Out Exes Live In Texas harmonise over a bed of accordion-led merriment, guitar and mandolin and ukulele skipping carefree alongside. This quartet has come a long way in a short time and the overtly sweet nature of their music, at times in the past too syrupy sweet, has a harder edge to it today, their sound a little tougher, although this makes it no less beguiling. It seems at odds with its physical surrounds, and yet draws it all together in a way which makes sense. People tap booted feet on old and cracked concrete. It does all make sense.

Inside, the hanger-like space eked out to form the main stage, the wind is less obvious, no gusts whipping skirts up and blowing hats off, merely ominous rattles and creaks as the old structure leans into it. Pigeons fly overhead and settle on rafters. Josh Hedley – suited, bearded, ten-gallon-hatted – commands attention with a voice of uncommon power and poise, using just his guitar as accompaniment, along with Will Van Horn on pedal steel, a near-virtuosic player whose tear-jerking country slide adds a glorious, warm melancholy to Hedley’s already heart-wrenching country songs.

Hedley himself is a character and his patter is upbeat and happy, belying the nature of the songs themselves. Van Horn hasn’t played any of said songs before, which highlights even more so his skill, and the pair embody country music and the big crowd raise cans of Melbourne Bitter in unison. Robert Ellis joins them for a track before it all wraps up and then it’s back out into the wind and to the bar and back to the Outdoor Stage.

The Cactus Blossoms, a brother-brother duo, two guitars and voices, somewhat reminiscent of The Milk Carton Kids, but with less punch and panache. They play well together and their voices meld into one and yet I’m left a little cold, not enough grit and grime for my liking – I like my country music set up against a bar, holding a beer into which to cry – but then, anyone to be seen after Josh Hedley had big shoes to fill.

Lindi Ortega’s music has evolved over the past couple of years, more than just a little. Where before it held a strong element of western swing melded well with a rockabilly strain and was subtle and sharp, today it’s a full-blooded country rock assault. ‘Champagne’ James Robertson on guitar, along with Sly Juhas drumming, build the base from which Ortega’s impressive howl grows and yet as the set goes on, it all seems to blend into one and even the older songs are treated in this full-throttle style and so there’s no light or shade, just loud and fast. All well and good, but I feel this could have been done better.

They finish with a version of Johnny Cash’s ‘Ring Of Fire’, which at first seems tainted as the foldback seems to have failed and so they can’t hear themselves but then it all just meshes as they make the best of a bad situation and the song – dissonant, broken, cracked – becomes the highlight of the set.

Robert Ellis, who’s swapped his casual day attire for a denim suit studded with rhinestones, has also evolved a great deal. No longer a solo artist armed with nothing other than an acoustic guitar and a clutch of well-written songs, Ellis today commands a crack regiment of musical soldiers who back his heaving, multi-headed beast of a set with an aplomb not often seen.

It all veers from near-cabaret to country to rock ‘n’ roll and back again, careening at breakneck speed from one style to the next and yet it’s seamless and adventurous, it’s stepped off the beaten path and can’t find its way back and yet it doesn’t need to – this is a musician who’s shed any semblance of normalcy and is intent on finding something truly different. It’s one of the most powerful sets I’ve been privy to and it leaves many standing stock still, mouths agape, limbs akimbo, not quite sure what just happened and yet wanting it to happen again in all its gruesome glory.

Many of us step outside, patronise the bar, stand around drinking beer, bourbon, stunned, before moving onto the next leg.

“Did you watch the last US presidential debate?” a colleague then asks me. “The last ten minutes or so,” I reply. “Did you see how Trump just stalked the stage?” “Yep.” “That’s what Cash Savage does, she stalks, although she does it properly.” It’s true, Savage stalks from one side of the murky stage to the other, stepping between members of her band – guitars, bass, fiddle – mic in hand almost daring someone to do something wrong or stupid before filling the air with her howl, her freight-train vocal express. The band pack a punch, the crowd heaves, almost breathing in and out as one, the band spend most of the set as silhouettes, country punk ‘n’ roll coming out of the blackness with more power than the wind which still whips the usually insipid bay water to angry, frothy, white caps.

And so to the finale, Marlon Williams in his only Melbourne show of the year, a man whose star has risen so quickly and with such dazzling speed that one wonders where, if at all, it will finally peak. With his Yarra Benders in tow, Williams does as he has so well these few years past – songs of intricate beauty, a thin vein of country running through them all, crooned and howled, whispered and wailed, his voice is his weapon as is his arsenal of simple-yet-poignantly strong songs – it’s little wonder he’s as popular as he is.

A cover of Neil Young’s ‘Out On The Weekend’, for which this small festival is named, goes down a treat and it all wraps up a little too soon and one wanders out of the big ol’ shed at the end, with everyone else, and are buffeted again, gulls floating overheard in the dark on the wind above the taco trucks and burger bars (now long sold out), we all saunter out and talk it over, voices raised above the gusty howl, try and find a cab, an Uber, eventually to the train and back into the city leaving behind another example of how a music festival – one with the music and the punters in mind, more so, at least on a surface level, than the making of multiple monies – should indeed be run. A resounding success by all accounts, the music for the most part, truly great.