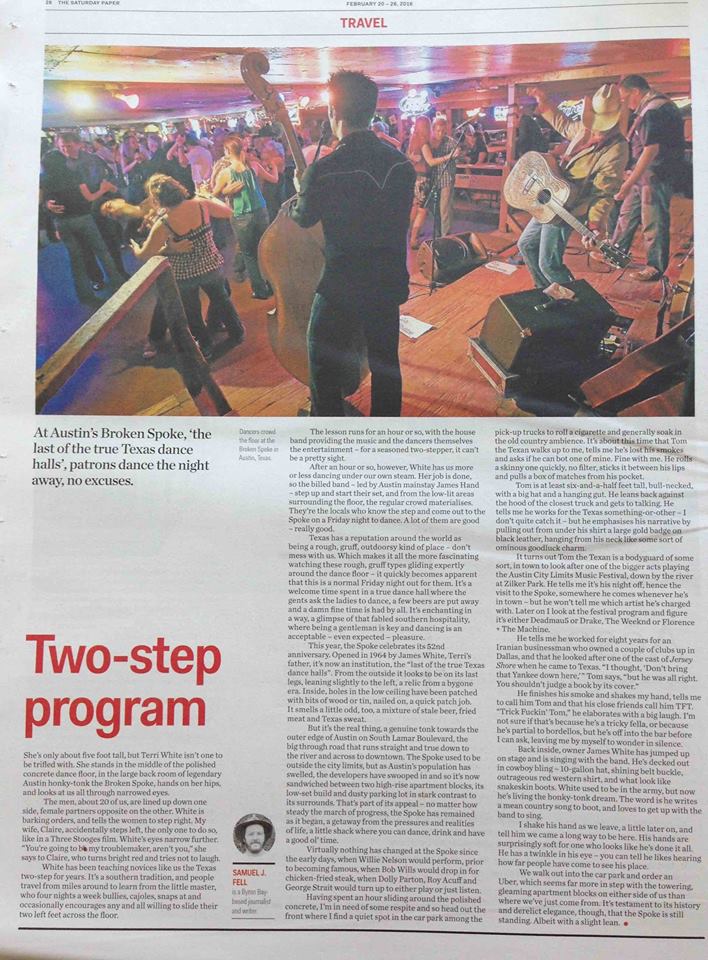 Everything is bigger in Texas, from the hats and trucks, to the stories and steaks. But nothing is bigger than the legend of The Broken Spoke, the last of the true Texas dance halls, writes Samuel J. Fell.

She’s only about five foot tall, but Terri White isn’t one to be trifled with. She stands in the middle of the polished concrete dancefloor, in the large back room of legendary Austin honky tonk The Broken Spoke, hands on her hips and through narrowed eyes, looks at us all.

The men, around twenty of us, are lined up down one side, female partners opposite on the other. White is barking orders, tells the women to step right. My wife, Claire, accidentally steps left, the only one to do so, like in a Three Stooges film. White’s eyes narrow further. “You’re going to be my troublemaker, aren’t you,” she says to Claire, who turns bright red and tries not to laugh.

White has been teaching novices like us the Texas Two-Step for years. It’s a southern tradition, and people travel from miles around to learn from the little master, who four nights a week bullies and cajoles, snaps at and occasionally encourages any and all willing to slide their two left feet across the floor.

The lesson runs for an hour or so, the house band providing the music, the dancers themselves the entertainment – for a seasoned Two-Stepper, it can’t be a pretty sight.

After an hour or so however, White has us more or less Two-Stepping under our own steam; her job is done, and so the billed band – Austin mainstay James Hand – step up and start their set, and from the low-lit areas surrounding the floor, the regular crowd materialise, the locals who know the Step, who specifically come out to the Spoke on a Friday night to dance. A lot of them are good, really good.

Texas has a reputation around the world as being a rough, gruff, outdoorsy kind of place, where men are men and don’t mess with us. Which makes it all the more fascinating watching these rough, gruff types gliding expertly around the dancefloor – it quickly becomes apparent that this is a normal Friday night out for them, time spent in a true dance hall where the gents ask the ladies to dance, a few beers are put away and a damn fine time is had by all. It’s enchanting in a way, a glimpse of that fabled southern hospitality, where being a gentleman is key, and dancing isn’t a dirty word.

This year, the Spoke celebrates its fifty-first anniversary. Opened in 1964 by James White, Terri’s father, it’s now an institution, the “last of the true Texas dance halls”. From the outside it looks to be on its last legs, leaning slightly to the left, a relic from a bygone era. Inside, holes in the low ceiling have been patched with bits of wood or tin, nailed on, a quick patch job. It smells a little odd too, a mixture of stale beer, fried meat and Texas sweat.

But it’s the real thing, a genuine tonk toward the outer edge of Austin on Sth Lamar Boulevard, the big through road that runs straight and true down to the river and across to downtown. Virtually nothing has changed since the early days when Willie Nelson would perform, prior to becoming famous, when Bob Wills would drop in for chicken-fried steak, when Dolly Parton, Roy Acuff and George Strait would turn up to either play or just listen – such is the lure of the Spoke. 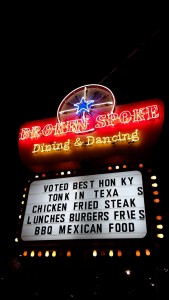 It used to be outside the city limits, but as Austin’s population has swelled, the developers have swooped in and so it’s now sandwiched between two high-rise apartment blocks, its low-set build and dusty parking lot in stark contrast to its surrounds. Which is part of its appeal – no matter how steady the march of progress, the Spoke has remained as it began, a getaway from the pressures and realities of life, a little shack where you can dance, drink and have a good ol’ time.

Having spent an hour sliding around the polished concrete, I’m in need of some respite and so head out the front where I find a quiet spot in the carpark amongst the dusty pick-up trucks to roll a smoke and generally soak in the old country ambience. It’s around this time that Tom the Texan walks up to me, tells me he’s lost his smokes and can he bot one of mine. Fine with me, I tell him. He rolls a skinny one quickly, no filter, sticks it between his lips and pulls a box of matches from his pocket.

Tom the Texan is at least six and a half feet tall, bull neck, big hat and a hanging gut. He leans back against the hood of the closest truck and gets to talking. Tells me he works for the Texas something-or-other, I don’t quite catch it, but he emphasises his narrative by pulling out from under his shirt a large gold badge on black leather, hanging from his neck like some sort of ominous good luck charm.

Turns out Tom the Texan is a bodyguard of some sort, in town in this instance looking after one of the bigger acts playing the Austin City Limits music festival, down by the river at Zilker Park. He tells me it’s his night off, hence the visit to the Spoke, somewhere he comes whenever he’s in town, but he won’t tell me which artist he’s charged with. Later on I look at the festival program and figure it’s either Deadmau5 or Drake, The Weekend or Florence & The Machine.

He tells me he worked for eight years for an Iranian businessman who owned a couple of clubs up in Dallas, and that he looked after one of the cast of Jersey Shore when he came to Texas. “I thought, don’t bring that Yankee down here,” Tom says, “but he was all right. You shouldn’t judge a book by its cover.”

He finishes his smoke and shakes my hand, tells me to call him Tom and that his close friends call him TFT. “Trick Fuckin’ Tom,” he elaborates with a big laugh. I’m not sure if that’s because he’s a tricky fella, or because he’s partial to ladies of the evening, but he’s off into the bar before I can ask, leaving me by myself to wonder in silence.

Back inside, owner James White has jumped up on stage and is singing with the band. He’s decked out in cowboy bling – ten-gallon hat, shining belt buckle, outrageous red western shirt, what look like snake-skin boots. White used to be in the army, but is now living the honky tonk dream. Word is he writes a mean country song to boot, loves to get up with the band to sing.

I shake his hand as we leave, a little later on, tell him we came a long way to be here. His hands are surprisingly soft for one who looks like they’ve done it all. He has a twinkle in his eye, you can tell he likes hearing how far people have come to see his place.

We walk out the front into the carpark and order an Uber, which seems far more in step with the towering, gleaming apartment blocks on either side of us than where we’ve just come from. Testament to its history and derelict elegance though, that the Spoke is still standing. Albeit with a slight lean.