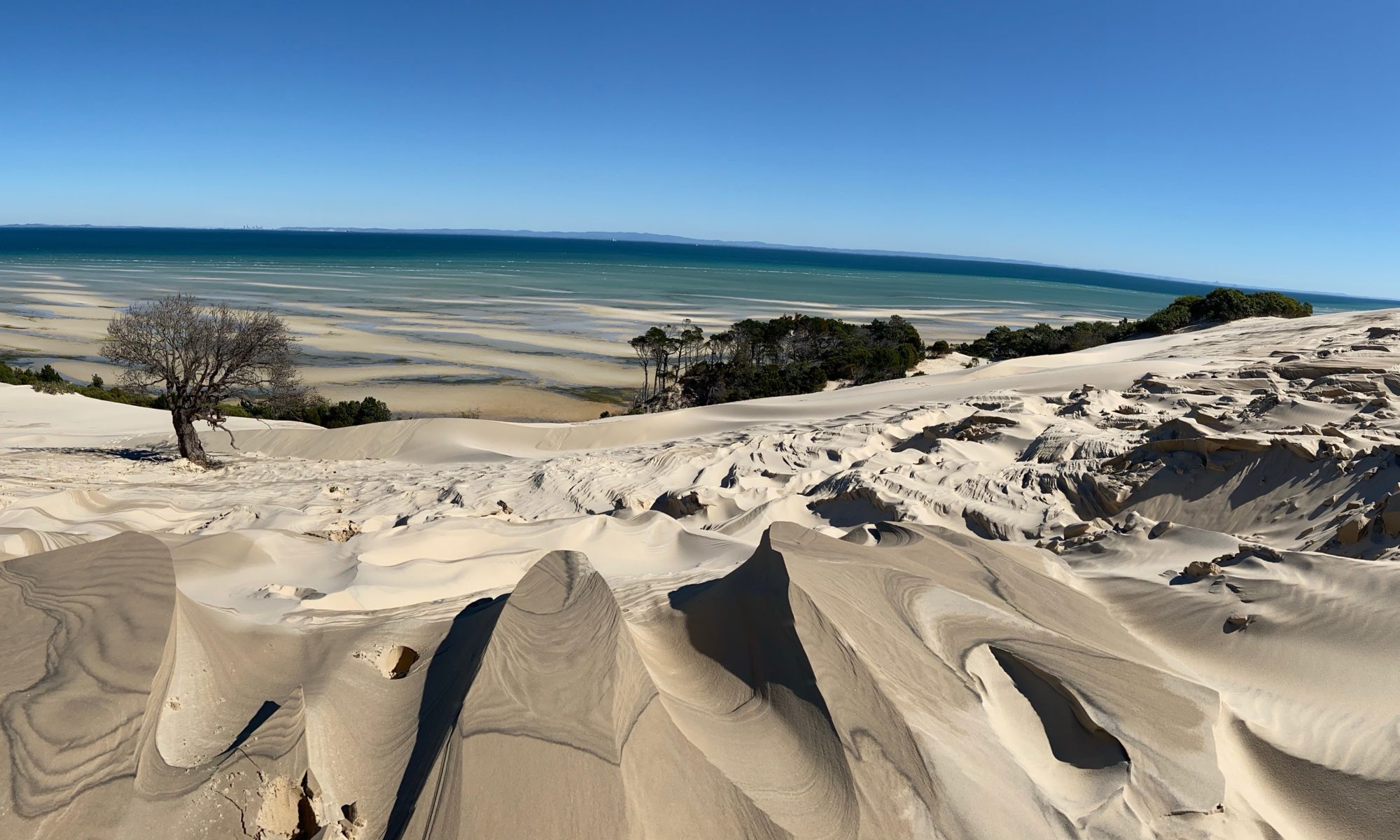 The Moreton ferry terminal is eerily quiet for a Monday morning. No people about, ticket office closed, a distinct dearth of big boats. I briefly wonder if we’re too early, but a quick check of the Facts reveals we are, it would seem, in the wrong place – the passenger ferry and the car barge depart from very different locations.

And so our calm, organised beginning quickly turns into a mad dash across peak-hour Brisbane; stuck at lights on Ann Street in the Valley, behind delivery trucks and buses, the minutes counting down all too quickly. By some minor miracle we make it to the Port with time to spare though, tyres squealing and hearts beating, onto the boat which pulls out minutes after we’ve come to a halt.

Claire and I regard this a success, despite the wayward start to proceedings, and the week away begins. 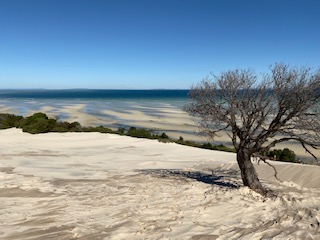 Booked on a whim almost a year ago, six days on Moreton is the situation, the fact the northern border opened up two days prior to our departure a glowing coincidence we take full advantage of. The truck is packed and Relaxation is on the cards, swapping one beach for another in an effort to Slow Down, to Unwind, to take minds off what’s happening the world over and Take Stock. Keep it Chilled Out.

There’s enough beer in the back to stun a horse, and between us we have at least six books. Good times ahead, no?

The house sits on the edge of the hill, across the path from the western beach, Moreton Bay spread in various shades of blue before it, Brisbane itself hazy on the horizon, slightly south. A couple of mates and their daughter, us and ours, another family of mates a few houses down, a decent arrangement. We wheel off the boat onto hard-packed sand, wing a right and find the house, parking and unpacking, sorting the details. 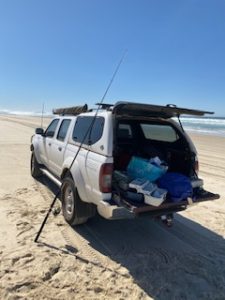 Truck tyres are let down to 18psi. 4WD has been engaged. Fishing rods and tackle boxes litter the tray. The sun is out and the stereo turned up, windows down, sea breeze on your face as you ride up the beach, the slight to and fro as you cross loose sand becoming part of the appeal of it all.

The interior track leading from western beach to east is a half hour jolting wander, second gear most of the way, the occasional kick down to first to navigate the heaping soft sand thrown up by trucks come before. The landscape changes dramatically multiple times, from lush rainforest to scrubby dunes and back again, sparsely vegetated to jungle-thick. The track cuts through narrow crevices you can touch out the window, heavily rutted and bouncing, Addy in her seat in the back like a pinball, loving every second of it.

On The Tuesday, we manoeuvre across the island onto the vast eastern beach, bordered by the wild Pacific, and head north to the lighthouse, up the sandy track to the park and out to walk the North Point. Marty, Claire and I lean against the railing at the top, overlooking the north-east corner. The water is innumerable colours, stretching far east where it becomes almost black. Two whales frolic on the edge of the deep, slapping the water with their tails sending plumes of white froth skyward, rolling about without a care in the world. 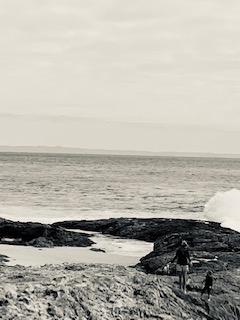 Far below us, in the shallows off the rock, we see a couple of what appear to be large fish. We can’t tell what sort. To the right, a piece of rock juts from the headland, capped underwater by what seems to be a seaweed forest – from this forest, this hive, come more and more of these fish. Sharks, not sure what kind, but more than a dozen appearing from the gloom. They’ve spotted a shoal of fish and, for the next few minutes we watch them corral the shoal into a tight ball before attacking – jagging into the swarm and getting their fill, dozens of them, feeding together.

Far bigger, darker shapes get wind of what’s happening and from the deep, we see them gliding in for their turn.

On Wednesday, we point the trucks south along the eastern beach. The Bay has pulled back and the tidal flats stretch toward the mainland, myriad colours painting a swirling portrait. We stop at the dunes halfway down, I climb to the top twice in an effort to get some exercise. The views are stunning, dramatic. We pull sheets of old board from the back of the truck and the kids carry them up, and sit on them to slide down. 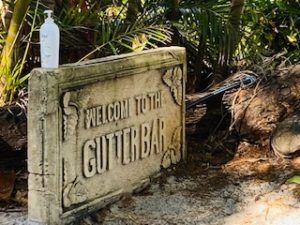 Our true destination is the Gutter Bar, a grocery-cum-bar tucked into trees on the southernmost tip of the island, famous (or infamous, depending on yr view) for serving little else other than burgers and stubbies of VB. We sip and eat in the sun, wander about the point finding shady spots with jerry-rigged wooden seats that’d be nigh-on perfect for an evening brew, watching the sun sink over the country across the Bay. 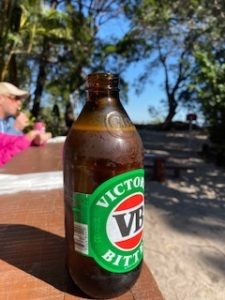 We head back north, just beating the tide, up onto the bypass track that winds up and across the hill behind Tangalooma, an hour journey that ‘bypasses’ a single kilometre of resort. It’s heavily churned and is slow going. Claire gets out before we hit it, and walks the rest of the way.

Two days later, and the trucks stink like rotten fish, the result of dead starfish washed up on the beach popping under tyres and coating the undercarriage with their insides. There were thousands upon thousands of them littering the sand on our way to the south end, I didn’t realise what they were until I’d driven over a patch of them.

We stopped and got out for a closer look, Addy picking a few up and putting them gently back into the water. Vast armies of Soldier Crabs watched us on stalked eyes, skittering away like flat blue waves whenever we got too close. 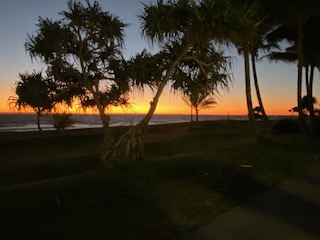 Each evening, we’d convene on the top deck to watch the sun sink. A quiet beer, a glass of bubbles, Addy messily eating dinner, regaling anyone who’d listen about how she fed a dolphin last night (we know, we were all there), and how she’s still hungry (we all know, she always is). Dinners are pulled pork and slaw; vego lasagne; curry; a buffet of leftovers. Drinks are beer, Micheladas, sparkling wine, the odd whisky nightcap. We watch the footy on Thursday and Friday night, the former being Marty’s team who win easily, the latter mine who lose brutally.

I turn it off before fulltime and head out to the deck where Claire and Verity are drinking wine and discussing the state of the world.

I read two books and write some stuff. A few of us go fishing and catch nothing. Claire goes for walks and the three of us play tennis and basketball. Addy is enamoured by the older girls and they babysit her for an evening while the adults go to the bar and have a couple of margaritas.

On Saturday afternoon, truck packed, we wheel back onto the old barge, beached with ramp down onto the sand. We’re tucked into the back corner and Claire and Addy head upstairs to sit inside and watch the island pull away behind us (the latter chattering constantly), as I mooch around on the main deck waiting for the air compressor to become free so’s I can pump up the tyres.

4WD has been disengaged. Relaxation has been achieved. It’s time to swap this beach for our regular beach. We’ve Slowed Down, Unwound, Taken Stock, kept it Chilled Out. I head upstairs too, and watch the Island fade away.