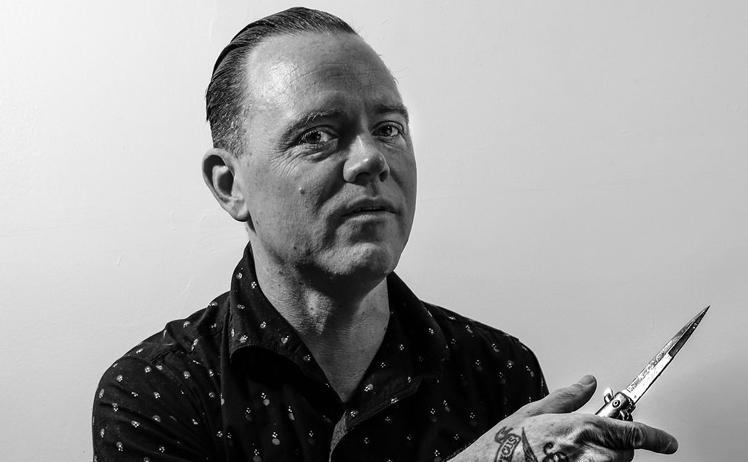 [Published in the January / February issue of Rhythms magazine, 2020]

As CW Stoneking contemplates his next album, it’s in the solo guise – just him and his shadow – where you’ll see him next. By Samuel J. Fell

Christopher William Stoneking is reclining on the bed of a non-descript hotel room. The lights are off and, save for the flickering of the television set which washes his face bright one second and returns it to shadow the next, he’s hard to see; an eerie setting which seems, in equal measure, both odd and fitting for a man who’s never been one to do things by the book.

Stoneking is in Sweden, in the town of Lund to be precise. It’s late on a Friday evening for him, a travel day, no gigs, he’s just come in from Germany, having already played shows in Berlin and Hamburg, Switzerland before that, Belgium before that, the Netherlands, France, Spain, Greece.

He has a few shows in Sweden over the coming days, then a couple in Norway to round off a grinding European tour. Then he’s on a break for a while, before hitting the road in North America in late January, through most of February, before returning home to Australia for a run of shows in March.

CW Stoneking & His Own Shadowis how this tour is billed, and it’s in this guise – solo, just the man, a guitar and his clutch of songs – that he’s been seen over the past couple of years. These days based in Nashville (after a couple of years in the UK in the late 2000s, coinciding with Britain’s mini blues boom), Stoneking has been looking to crack the American market – notoriously fickle when it comes to outsiders playing ‘their’ music – and so has pared things back, taking to it mostly on his own.

“That’s pretty much all I’ve been doing the last couple of years,” he concurs, on playing solo. “It was my manager’s idea to do a couple of [solo] shows in Australia, and the first one I did I fucking hated it, I hadn’t played solo in, I don’t know, five or six years.

“And so I scared the shit out of myself so much on the first one, that I practised really full-on over the next couple of days, then the second show I liked, and just got into it.”

“I’m very confortable with it now,” he says, when I venture that, as a solo player, there’s nowhere to hide, but that perhaps that’s become part of the appeal; the stripped back necessity of it all. “Some of the things that were a challenge at the start, feel pretty natural now.

“At the start, I had to make a lot of new arrangements to the tunes… Yeah, but I guess [the old guys], they would do that – imitate pianos and things like that, that’s sort of how I learnt to played anyway.”

Stoneking – known as CW, as much for brevity I suppose, as anything else – came to prominence in 2005 with the release of his first long-player, King Hokum. He’d been playing about for a number of years prior to this, his fascination with pre-war blues and jug band music, along with his knack for storytelling and a somewhat odd persona, endearing him to a growing audience around Melbourne for the most part, the occasional dalliance further afield.

King Hokum brought to life something old and dusty, brushed it off, spun it on its head and released it afresh to an audience who found something new within it all. Stoneking, with his mumbling way of singing, his slicked back hair and black preacher suit and hat, tattooed and wont to pepper his banter with casual expletives, seemed a little uncomfortable with the attention but carried on as if nothing out of the ordinary was happening.

Something extraordinary washappening though, albeit on a small scale, as far from the epicentre of this most American of musics as is almost possible. As has been noted in the American press, here was “a fine purveyor of American roots music who also happens to be a towering, youthful-faced white Australian man,”a man who, in reference to the way he talks and sings, carried an accent that “isn’t quite his own… but when he speaks, it is in that same soft, slow drawl that caresses his music. With another musician, it could all come across as tacky and distasteful, but not with Stoneking.

“He is so deeply immersed in the world that his music conjures that it’s hard to imagine him any other way.” Stoneking was doing something that was striking chords – not many players of the blues in this day and age are able to do this, and yet this most mysterious man from country Australia was doing just that.

Something I’ve always admired about the man’s music is the possibility that it presents – while I’m listening, I too am fully immersed in the blues, the country, the elements of jazz and hokum, of New Orleans and the Congo, but I’m also thinking ahead somewhat, wondering what else this fearless purveyor of all manner of rootsy sounds will come up with next.

His second record, 2008’s Jungle Blues presented straight up what the possibilities were (a steaming melange of blues-inflected, calypso-stained sounds), as did his eventual third long-player, Gon’ Boogaloo (2014), which threw a further curveball, an all-electric affair, Stoneking hunched over his Fender Jazzmaster, dressed from head to toe in white, old rock ‘n’ roll the album’s sonic motif.

Each album has offered something different, whilst building from the base which Stoneking has made his own; that of the blues. And so what of his next offering? The gap between albums has been widening, the sounds contained within widening too. The possibilities are almost endless, and so the question must be asked then, what will CW Stoneking come out with next?

“I’ve hardly been listening to any music for a while now,” he says languidly. We’re talking about what’s been inspiring him, sonically, and what he’s been toying with.

There’s no hurry to release anything, and as he says, “I’d be perfectly fine to put out a record every year if I had good shit,” he shrugs. “But if I put that many tunes together in a year, they’d be shit, to be honest.” He laughs at the perceived absurdity of it. “I just can’t do it,” he laughs, “I don’t feel like I’m much of an instrumentalist, you know?”

A return to playing with a band is perhaps the only thing Stoneking is sure of regarding his next album, an offering that is very much in the works, but again, there’s no rush – he’ll release when he’s ready, and indeed, it’s a slow process for him. “It takes me a long time to learn how to play what I wanna do,” he says. “I’m better at thinkin’ up shit, than actually knowing how to play it.”

His initial thought was to “get a horn band, maybe down in New Orleans or somethin’,” but he’s moved past this idea. His current home in Nashville has offered up more of an enticing possibility, that of a string band, a stripped back version of the country combos that have plied their musical trade in the south of the US for decades.

“I’m thinking maybe a string band, get ahold of some bluegrass players or somebody,” he says. “Not to do bluegrass, but good harmony singers and there’s all these different places to go with that.

“I like the idea of a small group, I might try and do as much as I can with a three-piece, like double bass, maybe mandolin or something… I hear some of these old Italian mandolin virtuosos, it sounds great. Cos they’re all playing amazing shit… sounds like an orchestra. So I’m kinda into stuff like that.

“I feel like this long period playing solo again, has got me a bit more fulsome in my playing, so I’ll find a couple of guys.”

Stoneking reclines further on the bed, thinks a little about what he’s just said, perhaps about how far off it is, perhaps an idea for a tune is forming. Either way, his mind is slowly churning, the bits and bobs that will eventually come together to form whatever it is he releases into the world next, slowly building. As far as he’s concerned, this is life, and this is how he lives it.

“I like it a lot, I really like touring. I like making tunes,” he says of it all. “I have a natural disposition to be a procrastinator, to be lazy, even with things I like. But I enjoy it, and once I’ve got ‘em done, I love playing them, I don’t get bored of my own songs.”

“[And so] I’ll just keep making batches of tunes,” he smiles. “I’m gonna be bald-headed soon, so, whaddaya gonna do about it? It just goes like that, I don’t care… I’ve got some real nice guitars, I’ll get some records out, I get to travel ‘round and eat some tasty food. If I can keep on doing that, and everything is cool with my kids, then what else are you gonna do?”