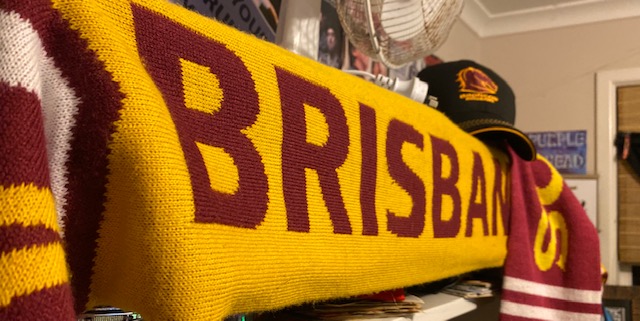 The text message comes in moments before kickoff. ‘Talk to me, mate. What’s going to happen tonight?’ It’s a question I’m unable to answer as I watch the two teams stream onto the park, Manly looking fit and confident, Brisbane somewhat nervous, not sure themselves of what’s to come.

As the pandemic has eased over the past weeks, there’s actually a crowd in at the Central Coast Stadium, albeit a small one – 178 it’s later revealed, a handful of diehards allowed into the ground to cheer, to back their Team. They all seem to be old blokes, Manly supporters draped in maroon and white, waving flags, sipping beer from plastic cups, eyes bright under the brims of logo’d caps.

What is going to happen tonight, I think to myself, a cold can in one hand, the other nervously twirling the edge of my moustache, my go-to when I’m nervous, anxious, not sure of what’s going on.

After last week’s mauling at the hands of the reigning premiers, it seems a fair few changes have been made, but how effective could they possibly be? Coach Seibold has wielded the axe in the ensuing seven days, players shifted up, others moved across the park, some on the bench, yet more this week watching from home; still beset by injury and suspension, it’s a Brisbane team that projects little more than uncertainty.

Indeed, the two pre-pandemic rounds, as is pointed out by Andrew Johns in commentary, seem a world away, two games Brisbane took relatively easily, only to stumble so overwhelmingly after the break that those games have almost ceased to exist in the minds of the Faithful.

Still, Faithful we are and so I’m on the couch, myself draped in maroon and gold. I’m not too concerned on the result, I write in reply to the text message, but I do want a good game of footy. A competition, at the very least.

From the outset, it seems this might be a tall order. Brisbane receive the kickoff; their ensuing runners are easily muscled into submission; Croft, at the end of the first set of the game, kicks out on the full. Manly then, with their first set, seem to be able to run the ball with consummate ease, their forwards chewing up post-contact metres.

I shift uneasily on the sofa, take a sip from the can.

It seems, at this very early point, and indeed, over the past fortnight, that what Brisbane have needed is two-fold (three, if you count their dire need for ball, over the last two games) – one, they need someone talking, leading. Two, they need someone (either that leader, or anyone else), to provide a spark. This is Brisbane after all, they’re not a shoddy team (at least not on paper), and so one gets the impression that if someone were to just do something good, then the team would automatically lift.

As the opening ten minutes tick past, agonisingly slowly, it gradually becomes apparent that this is a vastly different Brisbane team to the one which failed to show up last week. I sit up straighter, lean forward, begin to hope that perhaps that contest I’m wanting, will actually happen.

For Brisbane are beginning to play football. Manly, no doubt expecting the same opposition the northerners provided last week, are knocked off their game – Brisbane begin to look cohesive, they begin to move with purpose, the momentum begins to shift their way, they start to get the ball, keep the ball, use the ball.

It comes down to possession – give Brisbane an equal share of said ball, and they’re dangerous; give them the majority, and they’re looking near impossible to overcome. Starve them though, and they immediately retreat to survival mode, which in this competition, as has been evidenced by teams like St. George, Canterbury and the Gold Coast, isn’t enough to stop a rout, a rot, a general collective falling apart.

And then the spark – a high kick on the fifth across field to the right and the lightning fast figure of young Xavier Coates is there, takes it mid-air, manages to offload to a rampaging Kotoni Staggs, back from a week in the sin bin, who steps, pivots, decides against a safe pass for a certain score and instead kicks, chases, grounds it.

Brisbane are playing football, and it looks like we’ve got that contest on our hands.

Coates, who only last year dominated for QLD in the Under20 State Of Origin, looks set to begin, properly, what may well be a long and successful NRL career – a Greg Inglis clone, as Johns points out, multiple times, in delight, and that he is. The intuition, speed and power, not to mention his freakish ability under the high ball in attack, that he exhibits throughout the first half, is prime and indeed, just what Brisbane need; Croft and Milford constantly kick high to him on the right, and more often than not, he answers the call, scoring once, coming close again multiple times.

It could well happen, as a result of the youngster’s solid game, that Brisbane will need to swap out an Oates for a Coates on that right edge. Shift big and tall Cory to the left, fill the gap currently being juggled between Farnworth and Arthars, both of whom seem, at a glance, too slight to play a position that these days, is as much about power and brute force, as it is speed and grace.

Just look at Manly’s Moses Suli – playing in the centres, he harks back to the likes of Gene Miles in that he’s got grace (not that Miles had much grace, lets be honest…), but is as big as most front rowers getting about these days. Up against him on the Brisbane side was Darius Boyd, who obviously, during the week, knew what was coming his way and so aimed to tackle low in order to stem the man’s rushing game, which Boyd did to decent effect throughout the course of the match.

It all proved too much for Brisbane though, their collective foot coming off the gas not long before halftime, and not really returning until the final five minutes. During this gap, they didn’t capitulate, more just lost touch, not something you can do against a team like Manly, even with a three try lead. Manly scored three times, once shortly before half time, again shortly afterwards, again soon after that. A couple of soft penalty goals and it’s gone from 18-0 to 18-20, and the lead has slipped away.

Despite the fact Brisbane were offered a couple of opportunities to snatch it from the proverbial jaws of defeat, it wasn’t quite enough to overcome an opposition they should have, after leading by three converted tries, wrapped up and disposed of easily.

But to have played a game like that, having played as they have for the past fortnight, is such an improvement as to bring much joy to hearts north of the border, hearts that have been in mouths (if not downright shattered and left lying, bleeding, on loungeroom floors all over Queensland), hearts that would have been questioning what the fuck is going on?

There’s a long way to go, and indeed, this could again be ‘one of those seasons’, one where the word ‘rebuild’ gets thrown about as a damp and clammy bandage attempting to cover the wound of ‘not that great right now’. But this young team have promise, and as such, if blunders like the past two weeks can be forever vanquished, they should begin to gel properly and so reap the rewards us, The Faithful, know they’re entitled to.