The kids next door started playing some old punk rock earlier, something kind of familiar but not quite. Probably it was the style that sparked some long dormant recognition, more so than the actual band, the song itself. Ian laughed and remarked on, essentially, how shit punk music was. How had it endured as a genre?

We didn’t know who was playing it (perhaps a solo dad, reliving his past), the house had been empty for days aside from the gang of builders who’d been installing railings on the three stories of back decking, up on the peak of the Tramican Street hill, overlooking Home Beach, down and facing east, the Pacific Ocean beyond it innumerable shades of blue stretching further than anyone could see.

I went out the front for a smoke at one point, the music had switched to Black Sabbath, and I looked over to see if I could see and it turned out it was a group of four or five kids, swigging beer and listening to music made far before their time, before my time, although they only played ‘Paranoid’ and the ‘Rat Salad’ instrumental before turning the music off and migrating inside.

I smelt BBQ, so I figured their dinner was done and so the punk rock party was over.

Down on Home Beach, visible through the dusky gums as the sun sinks on the other side of the island, and lit brighter than usual for the gloaming time due to the size of the moon, there’s some sort of event on, a professionally erected tee-pee sort of thing ringed with fairy lights, a couple of food trucks parked up against it on the soft sand.

They, whoever theyare, had begun putting it up yesterday, for a wedding was the prevailing thought up here on the Tramican hill, but Ian and Buff had walked past it with Piper earlier in the afternoon and it seemed more like a corporate Christmas party than a wedding.

Later on, as the Sabbath cranked up next door and intrigued by what could be happening down on the windy beach, Claire found a pair of binoculars on the side cabinet in the kitchen and trained them on the party far below. She couldn’t quite tell what was happening, but she reported one girl twirling on her own, then either “sitting down or vomiting” into the sand.

I asked for a look but by the time I’d put my drink down and brought the binoculars to my eyes, the girl in question had vanished, dragged back into the faux-tee-pee by a concerned friend, someone who didn’t care, or who wanted her to carry on.

The whole thing seem to have wrapped up by eight o’clock anyway.

We’d arrived on the island, swapping one beach for another, a couple of days prior to this, driving up from northern NSW, slowing to cross the border which was still restricted to parts of the state, veering off the freeway slightly south of Brisbane to head back east towards the coast where the barge pushes off from Cleveland and sluggishly makes its way through the green-blue waters of Moreton Bay.

Home Beach, a long and slightly curving and deep set sandy run, the only dog beach on the island, has at present a natural lagoon cutting it in half longways, fed by the high tide which recedes and leaves this swathe of blue across white sand that gets quite deep in places and warms in the sun and so by late afternoon is like a bath, with shoals of bait fish swimming as one, leaping free as one, the late sun illuminating them bright and strong like some unseen giant hand is skipping handfuls of silver coins across rippled turquoise fabric.

We spend the afternoons there, Addy flapping about while Claire and I, knee-deep, toss my old football between us, laughing at the ridiculous things Addy says as she pretends to be a “rainbow fish”, a “sugar glider”, a “baby dolphin”, all within the same game which she tells us how to play as she plays it and the only thing we need to do is to be seen to be listening, even if we can’t hear her over the sound of the waves caressing the shore actual, across the way, and our own laughter.

One day not long before dinner we do the gorge walk, a short loop around the  North and South Headland Gorge at the southern end of Point Lookout, wooden walkways and stout steps and gravel paths, access out onto the rock above the action, the space lit dead-neon with Warning Signs but you can still get out there, above it all as the ocean storms about below, battering the base with gleaming white foam that sprays halfway up the face, the deep blue pulsating forever toward the gap and gushing faster as it’s restricted, eventually dying on the tiny patch of sand deep in shade far below at the narrow end that then changes into pandanus and scrub and the kangaroos sometimes venture down there to feed, if they’re done up top where the people are. 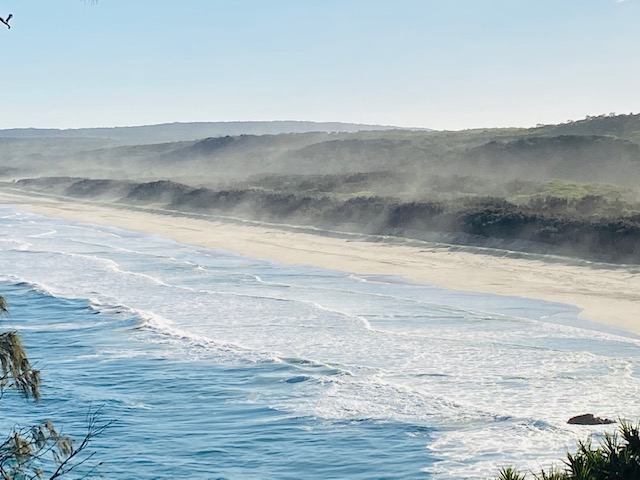 Addy is, at all times, a pirate and a fairy, a princess and a rainbow bird, sometimes a kitten or maybe a baby dinosaur. We feel that she may not actually know how to walk, her only states of being either asleep or in top gear. She rushes places other stroll, particularly me, and I wonder at times if we’re related at all. When I tell Claire this, she rolls her eyes and says simply, “Look at her, of course you’re related.”

Her wild red hair whips in the salty wind. My beard does the same.

Time slows down. Things centre around the beach, the couch, naps and food. As it gets a bit later, Ian opens a bottle of bubbles and I reef around in the fridge for a can of beer. Buff bustles around the kitchen, Claire in there too. I’ve lost count of the number of times I’ve stacked and unstacked the shitty dishwasher. Addy eats constantly, fruit and muesli bars and yoghurt and more fruit and toast. Since we’ve been here, I’ve read two books and maybe five newspapers.

This morning, our last full day on the island, we set out for the beach early, only to abort as Addy melted down about something (she’d not slept well the night before, she told us, even though we’d not heard her stir at all), so Claire heads beach-ward and I take Addy home where we eat more then come back down, but that’s aborted too when the tractors pulling full dive boats out from the dive centre onto the beach are too much for her to bear and so we head back to the house to read The Faraway Treeon the couch where it’s safe.

Claire, Buff, Ian and Piper arrive back from their own beach sojourn and so I head, solo, into Dunwich to buy the papers, some mushrooms for dinner, some panadol. I smoke a cigarette in solitude before driving the fifteen minutes north into town. I take my time. I buy what we need, more, three papers instead of two. I find a shady park and smoke another cigarette before slowly making my way back.

We lounge around, Addy entertaining herself. Buff and Ian go back to bed, Claire brings her book up from downstairs. I read one and a half newspapers in the chair with my feet on the small table, two cups of coffee, a piece of toast. This goes on and then we have lunch and quiet time is happening, Addy falls asleep almost straight away, Claire does too, and I read my book for almost two hours, on the couch upstairs with the hill breeze slowly wending its way through the permanently open swing doors off the deck, the lagoon brilliant blue down the way, the constant ocean sound part of why it’s all so perfect in its slow simplicity. 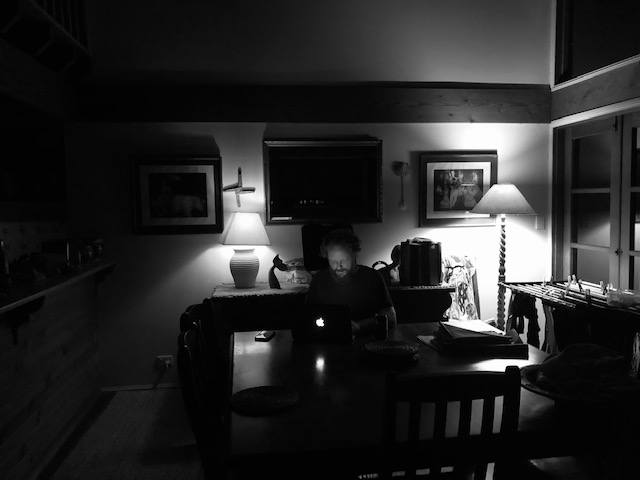