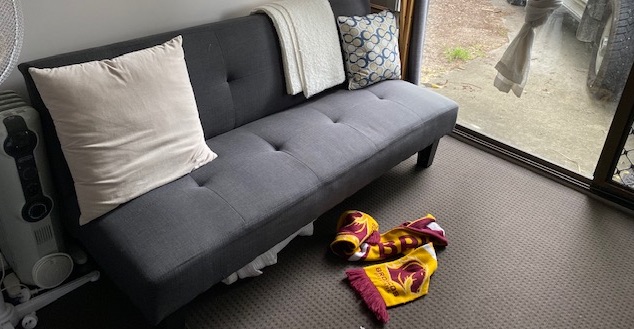 It’s late, sometime after ten, when the malaise sets in. My phone, now silent, lies on the table amidst the debris; two or three empty beer cans, a half full bottle of Makers, the overflowing ashtray.

Claire has long since gone to bed and I’m left in the semi-dark to contemplate the cruel nature of sport, of life in general. The immediate post-game analysis has petered out, a series of rapid-fire text messages with others around the country, and aside from the chill wind through the palm trees, it’s quiet.

I know it’s naught but a game, but the malaise thickens, swirls overhead, settles on the cold concrete beneath my feet. What can one really do about it, I suppose to myself. I pour another bourbon, splash some on the faded wooden table-top, try but fail to think of something else.

Conceding some ninety-three points across the space of two games while scoring only six, is another level, a level previously unheard of, at least north of the border. There are no doubt many heads being scratched as people search for answers, backs of necks being rubbed while eyes are downturned, those responsible lashed by torrent after torrent of verbal kickback, asking the question, What’s Gone Wrong?

Boys playing men it seemed in large part, one team so much more suited to the game than the other, that it became embarrassing as it dragged onward to its eventual sad and desperate conclusion.

Embarrassing for those watching at home, yes, but surely more so for those on the turf in the face of the booming hurricane, little before them but a sort of red, white and blue miasma, wave after ferocious wave pushing them closer and closer to the rock-strewn edge, where, after 80 minutes, they eventually beached, bruised and battered, on the shores of sporting oblivion.

Or so it seemed at the time.

Not much can be read from the final result other than one team was far better than the other – far, far better, essentially a non-contest, which at this level of professional sport is almost an affront to the game itself.

For two weeks now, this once proud team (and indeed, proud before the pandemic break, having won two from two), have succumbed, they’ve capitulated almost. They’ve been starved of possession, robbed of top-flight players due to injury and suspension, they’re the youngest team, on average, in the competition, they’re much maligned anywhere south of the 25thparallel, and yet these excuses, as they were, are no longer useful.

Perhaps if the contest had been closer, but two consecutive results like these, hint at something else, something deeper and more sinister than the likes of an injury or two, the odd suspension.

So what did go wrong? What has gone wrong?

A lack of communication, for sure; a lack of commitment, most likely; a lack of passion, a lack of confidence. A team Lacking. A team struggling to adapt to even the most simple of situations. A team better suited to a level well below that of ‘elite’. A team not even there. For if they were, a contest would have resulted, which while it may have still been one-sided, wouldn’t have been embarrassing. It’s one thing to lose, but to have fought. It’s another entirely to lose and to have done very little, if anything, about it.

People, many people, will be sitting with elbows on knees, chins cupped in hands, staring at a dark television screen thinking, so what next? Is this the nature of it all now? Is this what we, as supporters of this team, have been waiting for these months of lockdown gone?

Perhaps. It’s easy to pick up the draw and look ahead to what’s on the cards for next week – indeed, isn’t Forward the best direction in which to look? Yes, but moving forward is a struggle if you’re not acknowledging what’s come before, and as such, these past two weeks’ results can’t be merely swept under a rug.

No. The root cause needs to be found, and a rebuild needs to begin. Again. For otherwise, the malaise will thicken all the more, the miasma will build and swirl, the hurricane and the rocky edge, the shores of sporting oblivion, will become all the more prevalent. But where to begin such a rebuild? Sitting in the semi-dark, pouring more bourbon, flicking a butt into the ashtray, the malaise rises and boils again. I don’t even know where to begin.