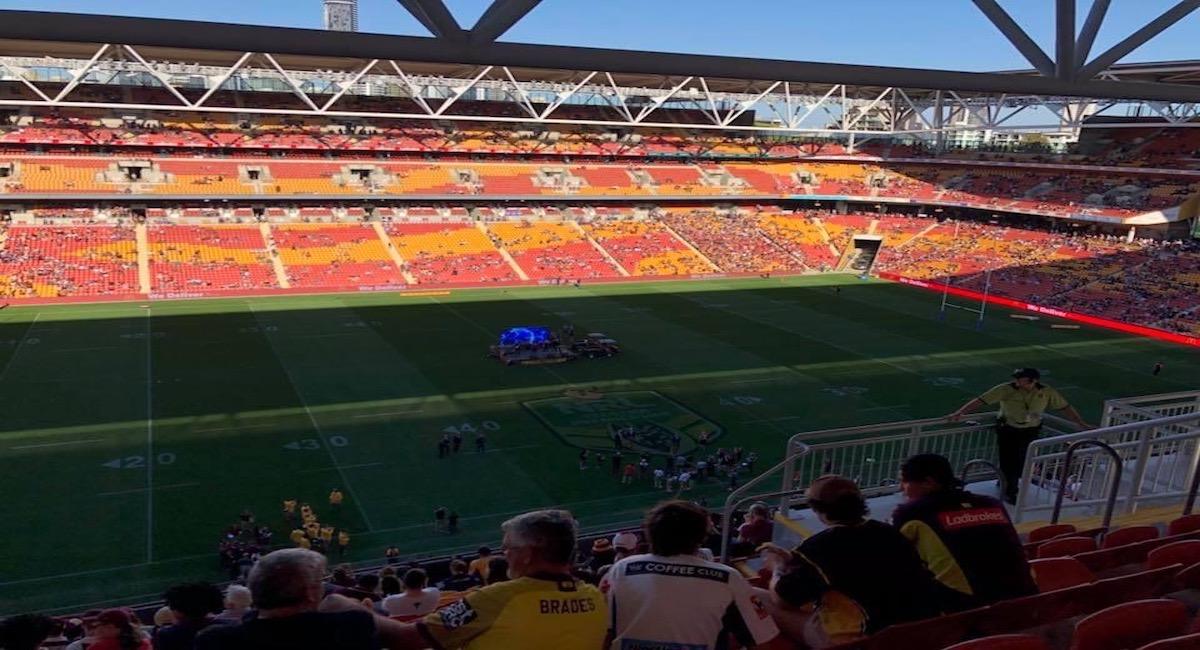 I buy a bucket of sweating chips and a sausage wrapped in stale white bread. It costs nothing, a bi-weekly fundraiser for the old and leaning wooden church, defying progress, tucked onto the side of the hill that Caxton runs down, the ICB booming beneath it, the pub encircling it, lit garish yellow and orange by the football stadium across from it.

James lobs insults from three seats down. I’m not listening. My right thigh is sore from the thumping I’ve given it over the past half hour, clenched fist against the faded denim of my old jeans. In my left hand is a plastic cup of slopping beer, three or four empties scattered at my feet.

Directly behind us, high in the western stand are the commentary boxes. Andrew Moore, calling for the ABC as he has done for decades, has the glass pulled open and is leaning out into the sticky winter night, microphone attached to his head, eyes glued to a pair of binoculars calling the Game for an unknown number of unseen listeners, a good deal of them no doubt in the same stadium as he, ears packed tight with buds, pocket transistors tuned to his rapidly undulating tones, hearing their own booming cheers played back at them via the wonders of technology as it rains down about them in real time.

The score begins to blow out and the Faithful wilt under the strain and so start to make exit, which is fine for us as it makes for easier access to the bar and so I switch to bourbon, James to rum, and we run down the clock, him heckling while I roll my eyes and bemoan to myself the state of it all, the knowledge that it is, indeed, just a game and so it’s all right, and yet it still pains.

Claire’s breathing changes, and I know she’s asleep. Lying beside her, I stop what we’ve been watching on the laptop, and pull up an old Game, one I’ve seen a dozen times, one in which my Team wins and wins big. Quietly, almost guiltily, I relive past triumphs, I revel in glories long gone, I reassure myself that the Team, which this year has sunk to lows never before seen, was once Good and so surely will be Good once more.

It’s Father’s Day, afternoon, the sun is slowly sinking and the opposite side of the stadium is doused in warm light. The turf is verdant, the crowd undulates, itself a sea of colour, all lit as bright as if the contrast has been turned to Full and everything is alive, from the smallest blade of grass to the plastic seats to the arena itself.

Wives and kids are at the house and three of us, Dads, are watching the Team play another team, and they win and they win big. Feats of unearthly athleticism abound and I, with skin in the game, rise with the Faithful spilling beer on the worn concrete beneath my feet, on my pants. I don’t care, no one cares. Noise from the crowd, from the tannoys, from the players, the referee’s whistle, the chanting and the cheering, the two big screens at either end of the field shifting constantly with light and colour and the ball swings wide, through hands, into space and they’re away, down the eastern edge in the bright, late sunlight towards the Line, and we rise as one, spilling beer as we go.

We always end up at the Paddo. Everyone ends up at the Paddo, at least those heading north. The rest are at the Caxton. The sheer volume of beer that would get poured on these nights would bring tears to the eyes of many a teetotaller. But we get a few in, maybe switch to bourbon, smile at complete strangers on the way back from the bar for no other reason than they’re clad in the colours of the Team and so you’re kindred and your ethos aligns and tonight was a Good Night. There have been bad nights, but this was a Good one.

We used to play in the front yard, a handful of local kids, maybe three a side in homemade jerseys with an old ball one of us had brought from home. The battles were as intense as those we absorbed on the teev every weekend through winter. The arguments, which never came to blows, were heated though, it was all on the line, not just bragging rights but the Feeling, the Feeling when a kick lands just so and someone’s there to jump on it and plant it in the corner with seconds to go and we’re up by two, kick to come, but it doesn’t matter because there’s not enough time for them to come back and we Won.

I’ll give it to my daughter when she’s a bit older and she can wear it, while I content myself with a scarf draped around my neck, and the two of us can sit in front of the teev, or drive across the border to the stadium where we’ll sit with all the rest of the Faithful, and she’ll be one too, and we’ll cheer as one as it all unfolds below us on the hallowed turf and my left thigh will ache from her small fist pounding on it as she follows the fortunes of those playing a mere game, but a game that means more than just that.

Something erupts from nothing. Maybe over on the left edge, maybe in the middle, the result of Possession, ball in hand and a keen eye, a left-foot step preceding a canny pass. A little bit of luck, perhaps, that morphs imperceptibly, then thunderously, into a sweeping backline movement and the gaps begin to open up and players slide through, throwing desperate glances over both shoulders, keening for support, it looms large on the inside and it’s suddenly, from nothing, two on one, a pass at just the right time, gallop to the line, swan dive, try time.

An unlikely victory, late in the season, by another team, leaves the Team on the bottom. Wooden spooners. Literal wooden spoons litter their training ground the next day, wags having thrown them over the fence under the cover of darkness. Darkness indeed, for most an entire season. It’s just a game, though, just a game?

I get an email, late in October telling me my membership is due, for next season; if I do nothing, it’ll automatically roll over. I remark to my wife, that I wonder how many people, after the season now mercifully finished, will hit the Opt Out button, their Belief fleeting and so they’ll not pledge any support, whether vocal or financial. She says, surely not many will. Surely.

I do nothing and my membership rolls over. That’s why they call us the Faithful, right? Good Days and bad ones… dark days and Bright… Swan Dive, Try Time…