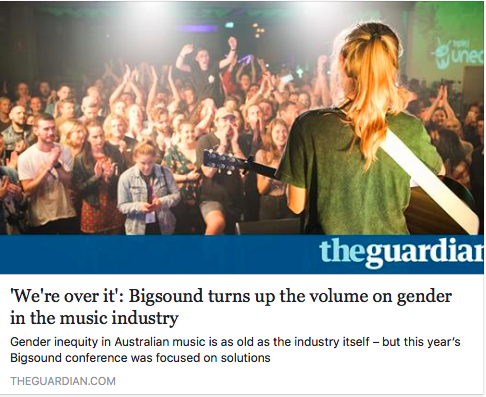 ‘We’re over it’: Bigsound turns up the volume on gender gap in music industry

Gender inequity in Australian music is as old as the industry itself – but this year’s Bigsound conference was focused on solutions. By SAMUEL J. FELL

Brisbane’s grimy entertainment district, Fortitude Valley, is home to a slew of live music venues, bars and clubs – and each year, the Australian music industry descends for annual conference Bigsound.

Tagging itself as a global gathering of musicians, media, brands and music lovers, Bigsound is at once a showcase for local talent, and a forum for discussion about an industry that’s in a constant state of flux. And two of the big issues on the table this year revolved around gender: sexual assault and antisocial behaviour at festivals and in live music venues; and gender equality and diversity within the industry itself.

The former issue was brought to the fore recently via a number of alleged assaultsat the Tasmanian leg of Falls festival. Helen Marcou, co-owner of Melbourne’s Bakehouse Studios, chaired a panel that argued for preventative, rather than reactive, measures.

Marcou is a co-founder of Your Choice, an initiative launched in Melbourne in July and heavily backed by industry heavyweights, which aims to curb sexual assault, violence and discrimination at live music events by making promoters, venue owners, artists and managers aware of the issue; and by giving them the tools and information they need to stop toxic behaviour.

As Marcou’s fellow panellist and PR head Stacey Piggott said, the only way culture will change is if people within the industry talk to each other about it: “The conversations need to be peer to peer,” she said.

The issue of gender equality was also on the table. In late July, the Skipping A Beat report was released by the University of Sydney, which assessed the state of gender representation in the industry. It found that women were poorly represented across festival lineups and industry boards; on stages and backstage.

The same week, industry copyright licensing body APRA/AMCOS released their own report which found that female members share in only 10% of the total royalty pool, and that more women are represented in cricket than songwriting in this country.

To many, these statistics come as no surprise.

“We’ve acknowledged there’s a problem; this is about how to deal with it,” Leanne de Souza said. De Souza is the executive director for the Association of Artist Managers, but also runs Facebook group MEGA (Music Equity Group for Action), advocating for a more inclusive industry.

“I think the conversation around gender equity has been so focussed on calling it out that we’re over it, women who’ve been working in the industry now for 20, 25 years are tired of that,” she tells me later. “We’ve heard those stories, so now it’s time to turn the narrative – what’s working?”

As a result of the research undertaken by RMIT, APRA/AMCOS have committed to a 25% increase in female members over the next three years. From October, the body will invest each year in the mentoring of female artists across a range of genres; and they have called for the entire industry to take action and eradicate gender disparity.

“So now there’s this energy for change,” de Souza said, “and there are some great things happening. There’s the Listen movement, safe spaces, there are youth mentoring services – there’s all this good stuff.”

Listen, based in Melbourne, is a diverse and inclusive feminist music collective whose focus is on giving a voice to minorities in the industry. It’s co-organised by Elspeth Scrine, who spoke on two panels at Bigsound and whose flyers could be found at venues across the Valley: “Top 5 Cop Outs For Booking A Lineup That Is Not Diverse” read one – no doubt a direct response to the Days Like This festival booking an all-male lineup in March.

Other fliers listed simple things everyone could do to make for a more inclusive industry: respect people’s pronouns; avoid reducing an artist to one part of their identity, like their gender; make sure your workplace has toilets that everyone can use.

They are deliberately easy ways to rebalance an industry that for decades has been seen as a boy’s club; a recent study by Triple J program Hack showed an overwhelming male bias within the majority of aspects of Australian music.

“It’s about individual accountability,” said de Souza. “There’s a sense in the industry that we’re moving towards a positive focus.”