[Published in the Spectrum section of The Sydney Morning Herald, March 31] 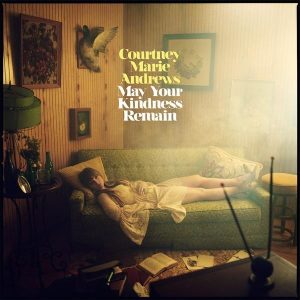 In Rough Around The Edges, a sparse piano-accompanied track from Courtney Marie Andrews’ second full-length record, the 26-year-old Arizona native sings of “The beauty in simple things.” She sings of desert sunsets and movie scenes, butts in ashtrays and birds in the sky, in a voice that pulsates with a power and a tenderness, in equal measure, a voice that acts as the star of May Your Kindness Remain.

Tough and hob-nailed on Border, a blues-esque groove; vulnerable on the exceptional title track, which brings a gospel flavour, Andrews joined by CC White on backing vocals which empowers her voice even more. The instrumentation is used as a support throughout, coming to the fore occasionally (and brilliantly when it does, particularly the electric guitar of Dillon Warnek), creating space for Andrews.

Intermittently, a song may bog down a little, perhaps not as powerful as it could be, but overall, as a songwriter and singer, Andrews shows that she is far from rough around the edges, that there is indeed beauty in simple things, and that country music, much like the blues, can be used as a base from which to explore some very interesting musical avenues. Samuel J. Fell